The U.S. House of Representatives rejected an amendment on Tuesday that was designed to free up research into the therapeutic potential of psychedelics. The body also addressed several other amendments related to cannabis. Rep. Alexandria Ocasio-Cortez (D-NY) filed the psychedelics measure, which would remove a 1990s-era provision that’s long been part of spending legislation for the Department of Health and Human Services (HHS). The congresswoman attempted to eliminate the language via an amendment in 2019 only to have it defeated … END_OF_DOCUMENT_TOKEN_TO_BE_REPLACED 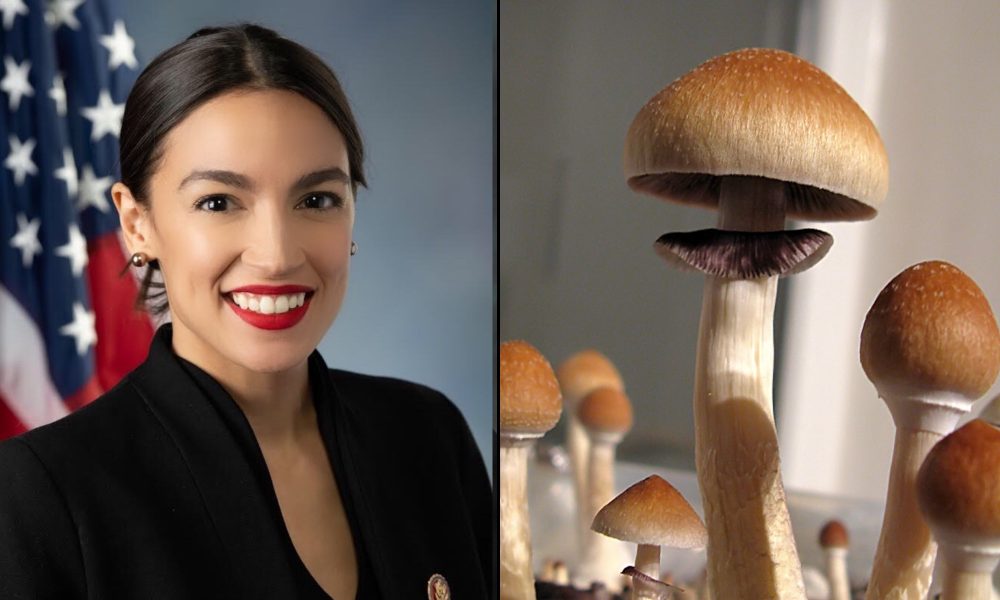 The U.S. House of Representatives rejected an amendment on Tuesday that was designed to free up research into the therapeutic potential of psychedelics. The body also addressed several other amendments related to cannabis.

Rep. Alexandria Ocasio-Cortez (D-NY) filed the psychedelics measure, which would remove a 1990s-era provision that’s long been part of spending legislation for the Department of Health and Human Services (HHS). The congresswoman attempted to eliminate the language via an amendment in 2019 only to have it defeated by Republicans as well as a majority of her own party members in a resounding vote of 91-331.

This time around—amid a growing national movement to reform laws around psychedelics—the chamber rejected it with a narrower 140-285 tally for inclusion as part of a large-scale funding package covering multiple federal agencies.

Most Democrats supported the reform in the most recent vote, but enough still sided with the vast majority of Republicans to defeat it.

“The United States has and continues to uphold an obsolete provision from the war on drugs,” Ocasio-Cortez said on the floor before the vote. “This provision specifically has for a very long period of time presented and acted as a barricade to federal research on certain substances— psilocybin, MDMA and marijuana—and allowing us to research the potential therapeutic applications of these drugs in the treatment of diseases such as PTSD, addiction and depression. We are long overdue.”

The House also acted on a series of other amendments concerning cannabis on Tuesday that the House Rules Committee had made in order for floor consideration earlier this week.

For example, a pro-reform proposal that advanced encourages the Food and Drug Administration (FDA) to enact rules allowing CBD as a dietary supplement and food ingredient. Filed by Rep. Kurt Schrader (D-OR), and approved in a voice vote as part of an en bloc package with other amendments, it encourages FDA to create a regulatory pathway for CBD “no later than 180 days after enactment.”

I spoke on the House floor tonight on my CBD amendment, as well as my bill HR 841, which would legalize the use of CBD in dietary supplements. pic.twitter.com/gZVuOkFu8t

In a House floor speech, Schrader said hemp businesses face “economic burdens from the regulatory uncertainty caused by lack of action” from FDA.

“The livelihoods of hemp farmers and safety of consumers across the country reside in the hands of the agency,” he said.

—
Marijuana Moment is already tracking more than 1,100 cannabis, psychedelics and drug policy bills in state legislatures and Congress this year. Patreon supporters pledging at least $25/month get access to our interactive maps, charts and hearing calendar so they don’t miss any developments.

Learn more about our marijuana bill tracker and become a supporter on Patreon to get access.
—

Lawmakers defeated a proposal from Rep. Debbie Lesko (R-AZ) to the U.S. Department of Health and Human Services (HSS) appropriations bill to eliminate a rider that’s currently in the legislation that “allows federal funding to go to institutions of higher education that are conducting research on marijuana.”

That measure generated significant pushback given that research into cannabis is an overwhelmingly bipartisan issue, and top federal drug officials have repeatedly urged Congress to support policies that make it easier to study the risks and benefits of the plant. What’s more, Lesko represents a state with adult-use legalization on the books.

The congresswoman argued in a House floor speech before the vote that not passing her amendment would “permit universities to offer a class called ‘Pot Smoking 101’ [that’s] dedicated to smoking pot under the false pretense of research.”

Universities can conduct marijuana research if they go through proper procedures, but Dems want to skirt the rules. Who’s to say we won’t have Pot Smoking 101 classes dedicated to smoking marijuana under the false pretense of “research”?

“Without such research, there would be limited scientific discovery and breakthroughs helping to shape our daily lives,” she said. “Evidence-based research regarding cannabis ought to be encouraged in academic settings, not discouraged, and we should ensure that we broaden our understanding of marijuana, not limit it.”

I just voted against an amendment that would have denied funding to universities that conduct research on marijuana.

We should be responsibly exploring the medical benefits of marijuana, not continuing to fight an outdated War on Drugs. pic.twitter.com/HadxHvKdho

Lesko’s amendment was rejected, with 147 votes in favor and 276 against.

Another amendment, which was rejected in a different en bloc package with other proposals, would have transferred “$25 million from the Environmental Programs and Management enforcement activities account to the National Forest System account for enforcement and remediation of illegal marijuana trespass grow sites on federal lands and for the clean-up of toxic waste and chemicals at these sites,” according to a description.

That measure was filed by Rep. Doug LaMalfa (R-CA), who recently released video of himself driving a bulldozer of cannabis plants.

Her proposals—which were aimed at appropriations legislation for the Department of Housing and Urban Development (HUD)—would have made it so marijuana possession or consumption could not be used as the sole basis for denying people access to public housing. One Norton amendment was narrowly focused on medical cannabis while a second measure would have covered all marijuana use that’s legal under state laws.

The spending package as introduced would also allow Washington, D.C. to use its local tax dollars to implement a system of lawful marijuana sales for adults.

That stands in contrast to a budget proposal from President Joe Biden, whose administration is seeking to keep language protecting medical cannabis states from federal intervention but has excluded the provision on giving D.C. autonomy to legalize marijuana commerce.

Another provision that was included as part of the Financial Services and General Government (FSGG) spending bill would protect banks that work with marijuana businesses. Further, the committee report attached to that legislation encourages federal government agencies to reconsider policies that fire employees for using marijuana in compliance with state law.

Federal health agencies should pursue research into the therapeutic potential of psychedelics for military veterans suffering from a host of mental health conditions, a report attached to separate spending legislation that’s part of the minibus package says.

Report language also directs the U.S. Department of Veterans Affairs (VA) to improve communication on veteran eligibility for home loans and report back to Congress on its progress within 180 days of the enactment of the legislation. A separate provision urges VA to expand research on the medical benefits of cannabis for veterans.

In the report for Agriculture Department funding, lawmakers took issue with the 2018 Farm Bill’s 0.3 percent THC cap for lawful hemp products and directed USDA to work with HHS and DEA on a study of whether that threshold is scientifically backed. That report also addressed numerous other issues related to the crop.

Other report language attached to this spending package highlights the difficulty of studying Schedule I drugs like marijuana, recognizes the medical potential of cannabinoids like CBD, encourages federal agencies not to restrict the plant kratom and acknowledges the lifesaving value of syringe access programs and safe consumption sites for illegal drugs.

The appropriations process this session has seen numerous drug policy reform provisions included in bill text and attached reports—also stopping immigrants from being deported for cannabis, for example, among other issues.

A bipartisan group of congressional lawmakers recently circulated a letter to build support for an amendment to a separate Department of Justice spending bill that would protect all state and tribal marijuana programs from federal interference—going beyond the existing measure that shields only medical cannabis states that’s currently enacted into law. There are now 15 cosponsors signed on to the broader proposal, which is being considered by the Rules Committee and may see floor action this week.

The Commerce, Justice, Science, and Related Agencies (CJS) spending report also notes that the Drug Enforcement Administration (DEA) has moved to approve additional marijuana manufacturers for research purposes and says the committee supports ongoing research efforts on cannabis, particularly in the wake of an outbreak of lung injuries associated with unregulated vaping products.

The bill was up for Rules Committee consideration on Tuesday, but the panel delayed decisions on amendments until Wednesday morning.

A provision was also attached to the bill that would make states and localities ineligible for certain federal law enforcement grants if they maintain a policy allowing for no-knock warrants for drug-related cases. That policy garnered national attention following the police killing of Breonna Taylor, who was fatally shot by law enforcement during a botched drug raid.