Justice Cannabis will be directly behind the empty bank facing Route 9 within the Waretown Town Center. (Photo by Stephanie Faughnan)   WARETOWN – Medical cannabis patients in Ocean County have something to look forward to in the near future: Access to their prescribed treatment will soon be closer to home.   As it now stands, there are no medical marijuana dispensaries in Ocean County. Many patients travel as far as Bellmawr, Eatontown and Egg Harbor City to fulfill their … END_OF_DOCUMENT_TOKEN_TO_BE_REPLACED 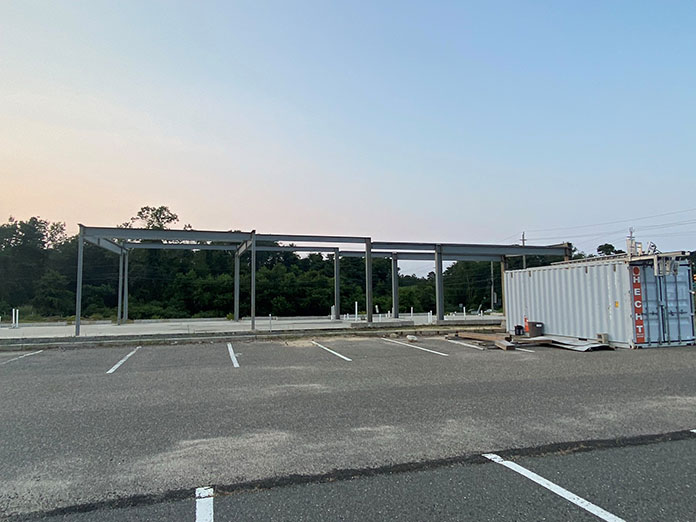 WARETOWN – Medical cannabis patients in Ocean County have something to look forward to in the near future: Access to their prescribed treatment will soon be closer to home.

As it now stands, there are no medical marijuana dispensaries in Ocean County. Many patients travel as far as Bellmawr, Eatontown and Egg Harbor City to fulfill their prescriptions.

“Our mission is to provide affordable cannabis to patients,” said Todd Johnson, Executive Vice President and Head of New Jersey Operations at Justice. “We want to do the same for regular consumers once recreational cannabis is available in the state.”

Local government boards have already approved the construction of the medical marijuana dispensary in Ocean Township. Plans are underway to commence building in the Waretown Town Center, where ShopRite is the primary tenant. The 4,200 square foot dispensary will face Route 9 and offer plenty of parking.

Prior to taking over the Route 9 location Sonic once occupied, Dunkin Donuts began erecting steel on the pad where Justice plans to set up shop.

Cannabis will not be cultivated or manufactured at the Waretown facility. Medical marijuana patients will have a vast selection of product choices. These include the flower itself and extractions in the form of vape cartridges, topicals, and tinctures.

Product will be shipped in from Ewing or other authorized locations as needed to accommodate patient needs.

Justice plans to open the Waretown dispensary within the next year. In addition, the company has plans for a retail establishment in Ewing and is in negotiations for a third retail facility within the state at an undisclosed location.

According to Laureen Stowers, Justice’s Vice President of Marketing & Interim National Director of Retail, the company’s business plan includes a focus on security.

“There’s a whole security team that comes with operating a retail store,” Stowers explained. “We’ve found that residents really appreciate the extra layer of security and therefore welcome us into their communities. We also work closely with local police departments.”

New Jersey State laws allow the Township of Ocean to collect two percent of retail sales. The local board of education formed a committee months ago and hopes the tax revenue can be afforded to them. The school district continues to experience financial difficulties attributable to a decrease in state aid.

Township officials have not commented on whether or not they would agree to divert the additional funds to the schools. They have also held off on allowing recreational weed sales – pending regulatory guidance from the state.

“The Township Committee and I believe that medical cannabis assists patients with health issues,” said Ocean Township Mayor Lydia Dodd. “Many chronically ill people have found relief with assistance from their doctor.

“A person needs a prescription from a physician to obtain the cannabis,” Dodd continued. “When Justice Grown approached the Township with their proposal, the Township felt this was the right location for this establishment.”

Barnegat residents Gerry and Don McGrath stood at the forefront as advocates for the legalization of medical cannabis when their late son struggled with a rare gastrointestinal cancer in 2004. A physician recommended marijuana as a means of helping the young man who died at age 28.