The lines between the wine industry and the cannabis sector are blurring with more wine companies poised to enter the market as marijuana legalization at the federal level appears inevitable, a top local wine executive said Thursday. Terry Wheatley, president of Vintage Wine Estates of Santa Rosa, said wine producers are increasingly looking at prospects in the cannabis drink business where there were $421 million in United States sales last year. That drink segment is projected to reach $1 billion … END_OF_DOCUMENT_TOKEN_TO_BE_REPLACED 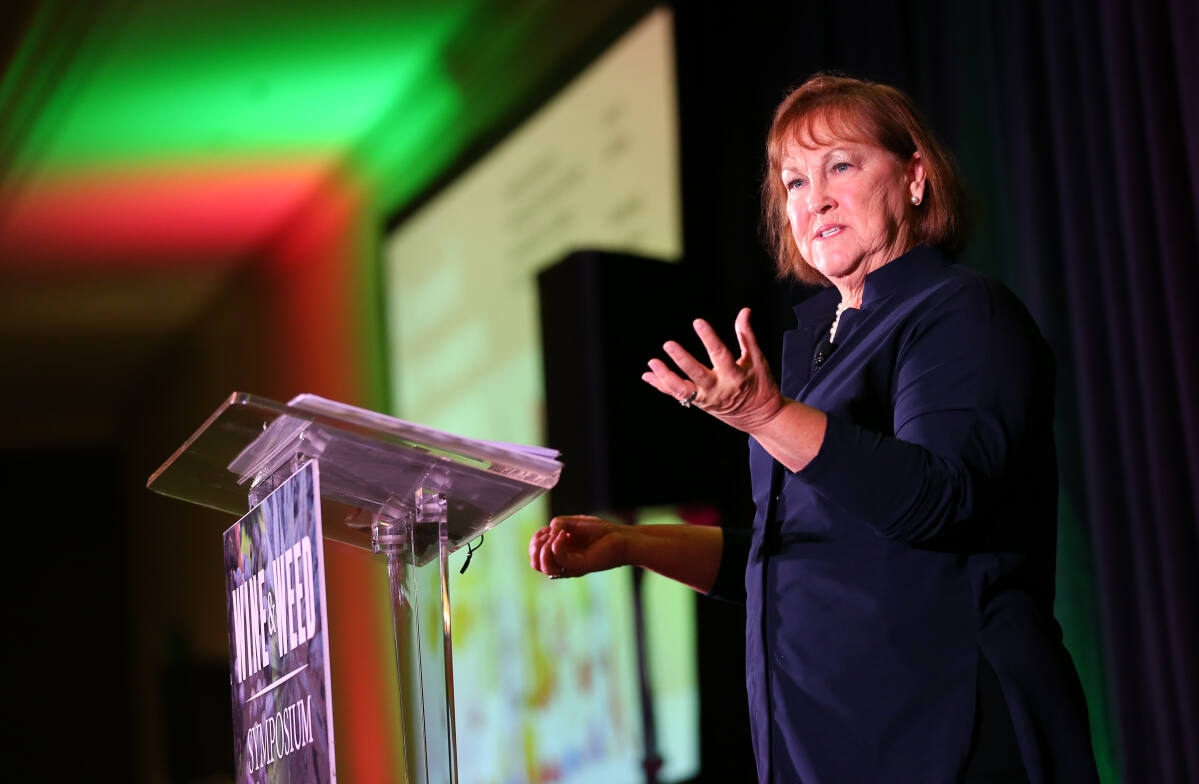 The lines between the wine industry and the cannabis sector are blurring with more wine companies poised to enter the market as marijuana legalization at the federal level appears inevitable, a top local wine executive said Thursday.

Terry Wheatley, president of Vintage Wine Estates of Santa Rosa, said wine producers are increasingly looking at prospects in the cannabis drink business where there were $421 million in United States sales last year. That drink segment is projected to reach $1 billion in annual revenue by 2025.

“There are so many similarities between wine and weed,” Wheatley said at the fifth annual Wine & Weed Symposium held in person at the Hyatt Regency Sonoma Wine Country hotel in Santa Rosa.

Wheatley should know. Besides her leadership role at Vintage Wine Estates, which recently became a stockholder-owned company, Wheatley sits on the board of directors of CannaCraft. That’s the Santa Rosa firm that processes cannabis into oils, drinks and food products and distributes them to licensed pot dispensaries. It is the second-largest cannabis producer in California.

The wine and cannabis industries have emerged from the worst of the pandemic with different trajectories. Long dominant in the North Coast over the past few decades, the wine industry has been contending with flat sales, greater risks from wildfires and a renewed push for consolidation by wineries trying to remain viable in the long run.

In contrast, investors have been flooding into the cannabis market looking to capitalize in the prime growing region of the Emerald Triangle counties of Mendocino, Humboldt and Trinity. Meanwhile, Sonoma County has become a key hub for processing the plant into various consumer products.

U.S. sales of legal marijuana grew during the pandemic and are slated for further increases as 19 states have so far legalized weed for recreational use. Still, the sector remains held back by prohibition at the federal level.

Already, local beverage companies have gained entry into cannabis. Lagunitas Brewing Co. of Petaluma produces a cannabis drink made by CannaCraft. In 2018, famous film director Francis Ford Coppola added a cannabis product line alongside his wine business, which he sold to Delicato Wine Family earlier this summer. Similar moves are expected because local wine and beer companies are viewing cannabis firms more as collaborators than competitors.

For example, Vintage Wine Estates is working on a beverage that would be infused with Tetrahydrocannabinol (THC), which provides psychoactive effects of the marijuana plant. That effort, though, is contingent on federal legalization of cannabis.

Wheatley also reminded the audience Thursday that Vintage Wine Estates has “very high interest” in another dimension of cannabis, using the cannabidiol (CBD) compound in the plant in the production of pain relief products that don’t get consumers high.

Ingredients such as CBD oil can be found in many products now on supermarket shelves since they do not have to be sold in a marijuana dispensary.

New York-based Constellation Brands, a giant beer, wine and spirits producer that owns the iconic Robert Mondavi Winery in Napa Valley among other wineries, has a large financial stake in the Canadian marijuana firm Canopy Growth. Recreational cannabis use has been legal in Canada since 2019.

But Wheatley said the efforts to capitalize on cannabis in Canada have stumbled and so far disappointed investors.

However, California has a natural advantage over other regions when it comes to leveraging its agricultural roots and infrastructure to turn cannabis business opportunities into successful ventures.

“The people up in Canada that went out and thought they could be farmers and they planted all this weed, they weren’t farmers. They didn’t know how to grow and the same thing happened in Nevada,” Wheatley said.

“Same things are happening across the country because they’re not farmers. That’s the advantage to me that the California cannabis business has.”

The winery executive punctuated that notion, saying the state has “amazing” pot farmers and winemakers.

The growth projections in the cannabis market are tantalizing for wineries and breweries eager to jump in. The legal California marijuana market is estimated at $4.4 billion in annual revenue and analysts have suggested it could reach $100 billion by 2030. Comparatively, in 2020, American consumers bought $67 billion worth of wine.

“Who in their right mind would not be interested in that?” Wheatley said about the vast potential of cannabis.

That’s the case even though the federal prohibition forces wineries to create separate marijuana businesses or work through a cannabis manufacturer to produce a cannabis-infused wine.

There are additional hurdles, including removing alcohol from wine and infusing cannabis in the drink. That’s a process some wineries have walked away from, while others remain interested, said Tracy Mason, CEO of House of Saka in Napa, a producer of nonalcoholic wines infused with cannabis and sold in licensed pot dispensaries.

Mason noted the consumer benefits House of Saka wine has over traditional wines: a glass of her wine has 11 calories per serving compared to the 226 calories of a typical serving of rosé. “It’s a big, big difference,” she said.

You can reach Staff Writer Bill Swindell at 707-521-5223 or [email protected] On Twitter @BillSwindell.